Orlok Dracule, often abbreviated simply as O.D., is both a character and a hidden boss in Bloodstained: Ritual of the Night.

He's voiced by Robert Belgrade in the English version of the game and by Ryōtarō Okiayu in the Japanese version.

After the fight with Valac and obtaining the Silver Bromide, the player can approach Orlok about the train station in the Bridge of Evil. He will provide Miriam with the Passplate if she had her picture taken by Dominique at her studio in Arvantville.

Orlok is also a hidden boss. In order to fight him, it is required to uncover at least 99.00% of the map; this will unlock a new book to borrow, the Tome of Conquest. If the player borrows this book and travels to the Glacial Tomb teleporter, he'll be waiting to challenge them in the room to the left.

If the player returns to the library after defeating him, it will be revealed that he's still alive, as he's a vampire. He will then accept defeat and allow them to take all of his books at once.

A secret item can also be obtained from him: the Nose Glasses that he wears. In order to obtain it, the player needs to go to the room that's below the library, use Invert and drop through the small gap under his chair. 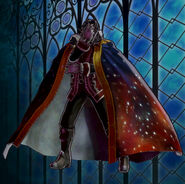 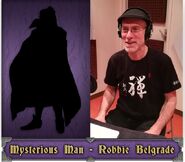 All that was known was that Robert Belgrade was going to voice this character.
Add a photo to this gallery

Retrieved from "https://bloodstained.fandom.com/wiki/Orlok_Dracule?oldid=13576"
Community content is available under CC-BY-SA unless otherwise noted.