For the Ritual of the Night boss, see IGA. 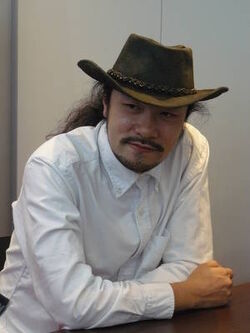 Koji Igarashi (五十嵐 孝司, Igarashi Kōji?), also simply known as IGA, is a Japanese game designer, director, and former producer of the Castlevania series by Konami. Born on March 17, 1968 in Fukishima prefecture, he joined Konami in 1990 in full-time full-time capacity, after having worked there part-time for a year while he attended school. He left the company in March 2014. On May 11, 2015 Igarashi launched a Kickstarter campaign for his new project Bloodstained: Ritual of the Night, a spiritual successor to his Castlevania games. He currently lives in Tokyo.

Igarashi started his career at Konami just when they established a new wing to the company that focused on creating educational software. Igarashi and a number of other graduate employees were instructed to build a business training simulation, in which the player would learn how to run a successful business. Despite the team's efforts to get the masquerading game built, the project was canceled after 12 months of development, towards the end of 1990.

Igarashi was moved to a new team and tasked to develop programming tools for the PC Engine game console, where he worked on Twin Bee and Gradius 2. Afterwards, he was moved onto the development team for a new kind of game, the dating simulation game Tokimeki Memorial. Even though he was employed as a programmer, Igarashi was instructed to write the storyline for Tokimeki Memorial.

Despite Igarashi's misgivings, Tokimeki Memorial was a hit. Because of the game's success, his boss requested him to write a sequel, but Igarashi protested. His superiors relented and produced a list of all the game projects currently in development at the company. Because of Tokimeki Memorial's success Igarashi was told he was allowed to pick the game he wanted to work on next. The game that he ended up choosing was Castlevania.

The Castlevania title Igarashi was assigned to ended up canceled and the team was disbanded. However, several members including Igarashi ended up working on Symphony of the Night, a side-project to the Castlevania series, which later became an important milestone and influenced many later Castlevania titles.

After Symphony of the Night was finished, Igarashi and the rest of the team decided to take a break from developing any sequels as they felt they needed to recover their creative energy. Afterwards, the Castlevania brand was handed to the Nagoya and Kobe branches of Konami. When KCEK's Circle of the Moon was planned for an American release, Igarashi requested to Konami's American president to become the game's producer in America, handling the PR. In return, the president requested Igarashi to produce a Castlevania game every year.[1]

Eventually, Igarashi resigned as Castlevania producer because the series made less of a profit than it used to, making it less of a priority to Konami.[1] One of the reasons he cited were the lowering of game's prices while the base development costs of the games stated the same, while at the same time the fanbase didn't increase enough to compensate for this.[1] Another reason was that around 2008 Igarashi was developing a Castlevania game for PS3 and Xbox 360, but the development was troubled. Igarashi mentioned it was a combination of these factors that resulted in Konami asking him to step down as producer.[1]

Igarashi left Konami in March 2014. Following this departure he stated: "I've decided to break out on my own to have the freedom to make the kind of games I really want to make — the same kind I think fans of my past games want as well." On May 11, 2015 Igarashi launched a Kickstarter campaign for his new project Bloodstained: Ritual of the Night, a spiritual successor to his Metroidvania style of Castlevania.

Below is a list of works associated with Koji Igarashi.

Retrieved from "https://bloodstained.fandom.com/wiki/Koji_Igarashi?oldid=12840"
Community content is available under CC-BY-SA unless otherwise noted.