Curse of the Moon 2

In Ritual of the Night, she is an exorcist sent by the Church and an old friend of Johannes. She is also the this game's shopkeeper, stocking on various goods and weapons to support Miriam on her quest inside Gebel's castle.

In Curse of the Moon 2, she is one of the seven playable characters and an ally to Zangetsu. There, she is capable of wielding a spear against her foes.

"An exorcist dispatched by the church, she supports Miriam as the shopkeeper. She speaks in a posh way, but she treats everyone kindly. While the church believes Miriam and Gebel to be demons, Dominique trusts them as human beings. In order to foil Gebel's ambitions, she asks her old friend Johannes to summon Miriam."

Dominique has a supply post located beneath what remains of Arvantville where Miriam can either buy or sell any collected items (weapons, armor, consumables, etc.) in exchange for gold. In addition, she is able to sell any extra Shards they feel that they don't need. After Gebel's death, Dominique will abandon her post and Anne takes over her shop-keeping duties for the rest of the game. Fortunately, Miriam can still sell her shards to the young girl since she claimed Dominique taught her how the process is done.

Bloodstained: Ritual of the Night

Dominique first appears in Ritual of the Night when Miriam and Johannes arrive in Arvantville. She introduces herself as an old friend of the latter and works with the pair in a supporting role by offering Miriam aid by selling items in a makeshift shop found in the shelter beneath the village. She also offers to buy any excess shards from Miriam on the supposition that she may be adversely affected if she collects too many for her to handle. Dominique has also hired the demon hunter, Zangetsu, to infiltrate the castle and hunt for the alchemist Alfred. During one of her conversations with Miriam, she reveals that her parents were also exorcists, but they perished in combat when demonic forces first appeared ten years before the young Shardbinder had awakened.

Though she offers aid and advice to Miriam while she looks for a way to stop Gebel, Dominique mysteriously disappears from her shop after Miriam breaks Gremory's hold over Gebel shortly before he succumbed to his curse. Anne, a little girl that Miriam and Dominique rescued earlier, manages the store in the exorcist's stead from that point forward, implying that the two spent so much time together that Anne was able to learn how to run it effectively. Off-screen, Dominique confronts Alfred and mortally wounds him, taking the Libre Logaeth for herself.

When Miriam finally confronts Dominique in the Glacial Tomb, she proudly reveals her true colors. Though she is an exorcist for the Church, her faith in God was shattered by the demonic invasion, and in renouncing God, she has chosen to side with the very creatures that killed her parents. Miriam does not take kindly to Dominique's betrayal and calls her out for her arrogance, yet she was indifferent to the Shardbinder's attitude. The two women battle each other in open combat, but unfortunately, Dominique used it to buy her time to summon Bael, the king of demonkind, to assist her.

Though she merges herself with the powerful demon, she is ultimately defeated and killed in the process.

Bloodstained: Curse of the Moon 2

This section is empty.
You can help out the Bloodstained Wiki by inserting content here.

Dominique initially appears to be a soft-spoken, level-headed, humble, and hospitable individual that provided shelter to Anne and accommodated Miriam’s needs frequently whenever she stopped by her shop during her journey in the demonic castle. True to her background in exorcism, Dominique showed empathy for the young Shardbinder by advising her not to abuse her powers lest she suffer the same fate as Gebel. This was a way to encourage Miriam to turn to her to dispose of unneeded shards and develop a sense of trust. Dominique was also shown to be bitter toward the demons that were summoned because they were responsible for the deaths of her parents. Rather than let her hatred consume her, she decides to avenge them by hunting for the Libre Logaeth herself so it would not be used for evil intent again. Later on, Dominique was revealed to have knowledge of Anne’s dream to become a storekeeper herself so she mentored her on how to look after her shop should she be gone for a prolonged period of time. This indicates that she is supportive of those she deemed worthy.

Dominique's true colors began to surface after Gebel was freed from Gremory's influence not long before he succumbed to the Crystal Curse: she had been manipulating the events all along in pursuit of power. Although she successfully tricked her own allies, she was not above backstabbing them if it meant achieving her personal ambitions. This was emphasized when she enlisted Zangetsu's help to hunt down Alfred while Miriam would deal with Gebel not knowing that they were being duped in the process. Furthermore, she inflicted a mortal wound on Alfred to personally retrieve the Libre Logaeth, but at the cost of the two heroes seeing through her ruse moments before the elderly alchemist passed away. When Miriam finally confronted Dominique over her actions, she reveals that the death of her loved ones in addition to feeling abandoned by God left her feeling nihilistic. She holds no pity whatsoever for innocent lives as long as their deaths brought her closer to achieving the power she sought out. Dominique's arrogance had, however, left her prone to underestimating how fast Miriam would catch on to her real intentions. This flaw in her character led to her undoing.

In Curse of the Moon 2, she largely has the same personality traits that she does in Ritual of the Night. The only difference is that her positive characteristics are heavily implied to be genuine instead of an act. For example, she intended to stop the demon Mephisto and was even willing to let herself be possessed and slain by Zangetsu's blade if it ensured that Mephisto would be killed, though due to developing bonds with him and her fellow allies, she was ultimately reluctant to follow through with her sacrifice. 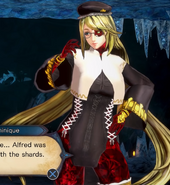 Dominique's solo artwork in Bloodstained: Curse of the Moon 2.
Add a photo to this gallery

Dominique is a French name derived from the Latin word Dominicus, "belonging to a lord:" the root of the name is Dominus, meaning "lord" or "master." While the French form is usually translated as "of the Lord" as in the Abrahamic God, this serves as a sidelong reference to her ties to Bael, as the demon Bael's name was inspired by deities addressed by the Semitic honorific "ba'al," meaning "lord."

Retrieved from "https://bloodstained.fandom.com/wiki/Dominique_Baldwin?oldid=15070"
Community content is available under CC-BY-SA unless otherwise noted.