Buer is an enemy in Bloodstained: Ritual of the Night and Bloodstained: Curse of the Moon. The 10th demon, a lion-head that rolls forward on the legs of a lamb.

Buer is the 10th spirit listed in the Goetia and a president of Hell who commands 50 legions of demons. He teaches natural and moral philosophy, logic, and the virtues of all herbs and plants. He can also heal infirmities and gives good familiars. His appearance differs across the descriptions; Johann Weyer's Pseudomonarchia Daemonum describes him manifesting as a star, the Ars Goetia as an archer, and the Dictionnaire Infernal as a lion's head surrounded by several goat legs. According to the Grand Grimoire, he is a direct subordinate of Agaliarept.

Bloodstained: Ritual of the Night

Buers are generally found in vertically-oriented rooms. They are initially encountered in an almost stationary state and will quickly roll toward the player when approached. They get knocked back with every strike received and may rebound on walls, so the player should be careful on when to attack them.

The Buer in Curse of the Moon attacks differently than its Ritual of the Night counterpart. It materializes out of thin air when the player approaches its spawning spot and then proceeds to travel in a diagonally, although mainly horizontal trajectory across the screen, either ascending or descending. Each time it reaches the edge, it will change directions and continue its movement pattern. It is not affected by physical objects and will pass through walls. 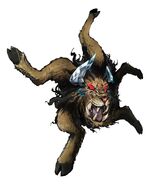 Buer's concept art from Ritual of the Night

Retrieved from "https://bloodstained.fandom.com/wiki/Buer?oldid=11830"
Community content is available under CC-BY-SA unless otherwise noted.