Bloodstained Wiki
Register
Don't have an account?
Sign In
Advertisement
in: Games, Section stubs, Curse of the Moon 2

Bloodstained: Curse of the Moon 2

Bloodstained:
Curse of the Moon 2

When a mysterious tower appears, seeming to summon the demonic castle once more unto the world, Zangetsu teams up with a church exorcist named Dominique to investigate it.

Dominique and Zangetsu glide through the night sky toward the tower. Upon reaching it, Dominique drops Zangetsu off at the top of the tower and he makes his way down it, eventually being confronted by the Drago-Symbiote. Despite besting the creature, before Zangetsu can finish it off, Dominique beats him to it. Going forward, the duo decide to travel together.

Making their way through a swamp forest, a tree branch gives way, dropping the heroes into the lair of Lubius. Upon defeat, the demon attempts to explode itself, but it is instead torn apart by a Drake Cannon blast.

Enter Robert, alongside whom Zangetsu once fought in a war. Seeing as they have a common enemy, Robert offers to join Zangetsu, but nearly balks when he sees Dominique, due to an unexplained enmity he has toward the Church. Zangetsu convinces him that her skills are needed, but he says he'll shoot Dominique if he ever finds cause to suspect her.

As they move through the next area: a waterfall cave that leads to an abandoned mine, they find flatbed mine carts, that are suddenly pushed along by the Gladiator Dozer. When defeated, it attempts to make a final ramming attempt on the platform, but then a mechanical construct appears and punches the demon off the railway into the lake below.

With danger averted for now, the construct opens... and out leaps a corgi. Zangetsu recognizes the dog from a past incident, but Robert takes aim, noting that the machine is a product of alchemy, which cannot be trusted. Zangetsu, remembering Alfred, points out that not all alchemists are evil, not to mention the dog came all this way to reunite with himself, so he's going to let it accompany them. A displeased Robert seethes that this is a mistake and they will come to regret this decision, but ultimately is forced to drop the matter.

The rail car comes to rest at a village frozen over due to attacks from Vepar. Destroying it causes a sword to be expelled from its dying body. When Zangetsu tries to walk away and continue forward, Dominique stops him and says the sword may be of use against the enemies ahead. Seeing as the exorcist will not budge on this matter, Zangetsu claims the Soul Eraser.

The quartet's journey takes them across the sea through a volcanic area and into the castle itself, which has taken on a suspiciously different appearance compared to previous journeys within its walls.

Atop a machine tower, Zangetsu is surprised by the return of Gremory, thought to have been banished during the castle's previous appearance, but he and his allies waste no time putting her down again.

Upon reaching the castle's top floor, Beelzebub begins pursuing them, surrounded in The Dark Swarm that he created, but is forced to actually battle them as they continue to push him back and evade him. However, not even utilizing his larger, stronger appearance grants him success, as though the heroes are exhausted from fighting him, they managed to defeat him, prompting a large hand to impale him from behind before a giant dark energy mass tries to possess the heroes, only for Dominique to leap in front of it and absorb it into herself, becoming possessed by the demon while her allies are launched out of the castle.

Regrouping, Robert is overcome with remorse as he realizes what had been right in front of him throughout his time traveling with this team. A portion of this remorse hardens into resolve as two men and a dog vow to rescue Dominique from her situation or perish in the attempt.

[Recap being written as you read this!]

The gameplay remains relatively the same as it does in the prequel except for several major changes. For example, in addition to Miriam, Alfred and Gebel, there are three new playable characters that possess new abilities and sub-weapons. The storyline is divided into episodes, allowing players to select levels whenever they wish, provided that they complete them first.

Curse of the Moon 2 was first announced by Inti Creates as a sequel to the first on June 23, 2020 due to its prequel being well-received by fans and backers of Ritual of the Night's successful Kickstarter campaign. Dominique as well as two new characters, Robert and Hachi, are confirmed to be playable alongside Zangetsu on the same day the announcement trailer was launched.

On June 27, 2020, the original heroes of Curse of the Moon were confirmed to be playable. On the same day, July 10 was announced to be the game's release date.

The player initially can play every previous stage in any order they please, obtaining a piece of technology and, with one exception, re-recruiting one of the other party members. At any time, between stages, the player may converse with recruited party members at the hub area, or speak to Alfred and depart for the final stage.

As with the previous game's example, the final stage's title is changed depending on whether or the player re-recruited any of the other party members before departing for the final stage. 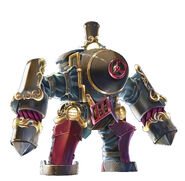 This section is empty.
You can help out the Bloodstained Wiki by inserting content here.

Community content is available under CC-BY-SA unless otherwise noted.
Advertisement