Bloodstained Wiki
Register
Don't have an account?
Sign In
Advertisement
in: Games, Curse of the Moon
English

Bloodstained:
Curse of the Moon

Single player
Bloodstained: Curse of the Moon is an 8-bit style game developed by Inti Creates and revised by Koji Igarashi. It was released on May 24, 2018. The game is a stretch goal from the main project Bloodstained: Ritual of the Night and acts as a spin-off to that game; an alternate take.

There was once a man who had been given
the moon's curse by demons.

That man was Zangetsu.

Wrapped in crimson garb with eyes like fire,
he relentlessly pursued the demons who cursed
him. As he journeyed from one pit of darkness
to another, he would stop at nothing until
he struck down every last demon in his path...

One night, he sensed the looming presence
of a great demon.

He swore to eradicate all demons no matter how
much of a threat they posed.

Bathed in moonlight, he cried out as he drew
his sword, which consumed darkness from
within its wretched steel.

On that night, either the demons, or the moon
itself, would feel the wrath of his blade.

The game begins with Zangetsu, a demon hunter who bears a deep grudge against any kind of demonic creature. He feels the existence of a very powerful demon with a terrifying aura and embarks on a journey seeking to destroy this Archdemon, whose name is Gremory.

Zangetsu's personality is rather cold and he will hardly show any feelings, let alone care for anything else than his duty: slaying demons. He also strongly values battle prowess, as is implied every time he encounters one of his companions.

The first one is a woman endowed with crystals holding demonic powers: Miriam.

They will eventually meet an old man called Alfred, who is a skilled alchemist with the knowledge of powerful spells.

Finally, Zangetsu and his crew will free Gebel from a goldened trickster. Gebel had magi-crystals transplanted in him just like Miriam, but has greater powers, allowing him to shapeshift into a bat and use them as his primary attack weapon.

Once Gebel is recruited, there will be four stages remaining, with the last one being the castle from which Zangetsu sensed the powerful Archdemon's aura.

At journey's end, Zangetsu protected
his allies, at the cost of succumbing
to the darkness. In order to stop
him, his allies venture forth once more.


They may have to take their ally's life,
but can they still have his soul...?

Miriam, Alfred, and Gebel have lived to fight another day after their encounter with Gremory, but they cannot wait that long. Zangetsu has now been corrupted by the very darkness he swore to eradicate in mind. But that's not all, demonic forces are still on the prowl in the land.

The trio decides to travel back to the castle to save the night and hopefully, their fallen friend.

There are two gameplay styles available from the start. One is referred to as Veteran while the second is referred to as Casual. Veteran Style allows the player to make their way through the game with traditional mechanics akin to to the linear Castlevania games such as Castlevania III: Dracula's Curse. Casual Style mellows down these mechanics by offering unlimited lives and players won't be knocked back when they take damage, allowing their gameplay experience to be a bit more pleasant.

There are a total of six endings in the game, depending on what the player's actions are.

If the player is on their first playthrough and chooses to recruit every character (Miriam, Alfred, and Gebel), he will then see the normal and first ending. ("Those Left Behind")

However, if the player chooses to kill every companion Zangetsu encounters, the ending will be the worst ending of the game. ("Emperor of the Dark")

Once the game has been cleared at least once, the player can choose to begin the game in Nightmare Mode.

In this mode, Zangetsu is not available, but the player will begin the first stage with Miriam, Alfred, and Gebel available right from the start (this allows for further exploration of zones that Zangetsu couldn't explore by himself, as some platforms leading to other screens, for example, are only possible to reach with Gebel in his bat form).

Instead of proceeding to Stage 8 after defeating Bathin, the three heroes will enter a ninth stage, Fallen Moon's Requiem, based on the Japanese interpretation of Hell.

Normal ending - Recruit all three allies
At the end, Zangetsu, after a fierce battle against the Archdemon, will notice a big shadow ball of dark energy used as a last resort by his enemy, preparing to charge against his exhausted allies and ultimately going to kill them all. Realizing this, Zangetsu's body reacted almost instantly, as he tried to block with his bare hands the ominous darkness menacing to kill his friends, hoping to save them.

Sadly, even though he managed to save everyone, the dark energy Zangetsu fully took corrupted his heart and now made him the Emperor of the Dark.

True ending - Clear Stage 9
After realizing Zangetsu saved them, Miriam, Alfred, and Gebel were saddened of Zangetsu's fate and decided to embark on a second adventure in order to deliver him from the vicious state of his heart.

In an ultimate battle against Evil Zangetsu, the demon hunter is freed from the Archdemon's influence thanks to Miriam, Alfred, and Gebel's teamwork, and eventually awakens in a strange city that those of the modern world would call "futuristic".

Bad ending - Kill all three allies
Zangetsu, in his quest to kill the Archdemon, is alone. Once he encounters Miriam, he decides to kill her as being a Shardbinder makes her an abomination. He also kills Alfred for being an alchemist and thus the cause of the demons' rampage, and once he sees Gebel, he understands that this man has crystals transplanted too and kills him for the same reason he killed Miriam.

Once he has the archdemon Gremory on the ropes, Zangetsu uses his most powerful slash to slice his foe in half. The castle then starts to fall apart. However, Zangetsu sees something appearing to be dark matter and this energy then surrounds Zangetsu, who takes it as a new power. After assimilating this darkness, a great black wave of energy hides Zangetsu from the screen, and as he reappears, we can see that his physical body experienced some foul changes, and thus, he becomes the Emperor of the Dark.

With the other heroes dead at his hand, is there anyone who can stand against this new Dark Emperor?

Solo Mercy ending - Ignore all three allies
Zangetsu, distrusting the warriors offering their help, but not enough to slay them where they stand, refuses their aid and confronts Gremory alone, cleaving her in twain with a secret technique similar to an attack used by only the Ultimate swordsmen. But Gremory is not finished yet.

In her desperation, she sends a large ball of dark energy at Zangetsu, who is exhausted from the battle. But to his shock, the three warriors he encountered appear. "Look out!!" they cry out, as they intercept the attack and it dissipates. They collapse, but Zangetsu must see to his own escape.

As the castle crumbles, Zangetsu realizes that this world, and those in it, had been crafted by Gremory, shown to him alone via the Curse Of The Moon. As the world fell away around him, he realized that his hesitation to slay or recruit the warriors he encountered, who then sacrificed themselves to save him, revealed to him his own weakness.

It was then that something changed within Zangetsu, who then dove into the spreading darkness, armed with his premonition of the battle to come, and his mind made up about the decision he would make.

Solo Neutral ending - Kill at least one ally, ignore the other two
Sources disagree as to which of the three was betrayed by their rescuer, only that the other two were definitively ignored when rescued by Zangetsu, who confronted Gremory alone.

Though he triumphed and cleaved the archdemon in twain, Zangetsu's heart ached. During the battle, he had felt uneasy, as if the Gremory he defeated had been little more than a shadow.

All Zangetsu knew was the certainty that there would be yet another fated night where his crimson blade, Zangetsutō, would flash in the moonlight.

Imperfect ending - Kill one, recruit another, kill/recruit/ignore the third
It is known that Zangetsu successfully defeated the archdemon Gremory, but it is also known that he did not fight alone. Regrettably, the consensus also states that at least one, if not two, of his potential allies was either refused, or slain. Which decision was made is not clear.

After their victory, the three heroes went their own ways. If Miriam was there, she wandered the land in search of a new reason to live, Alfred would realize new possibilities for alchemy and journey to revive the practice and seek new truth, Gebel, filled with demonic power and satisfied that the threat was quelled, disappeared once more into the void.

Zangetsu, on the other hand, felt uneasy, as if Gremory had been but a shadow of the demon that had cursed him. From this, it was certain that there would be yet another fated night where his crimson blade, Zangetsutō, would flash in the moonlight.

All four playable characters in the game.

The first portion of the World Map.

The second portion of the World Map.

Our heroes left Zangetsu behind after leaving the castle. 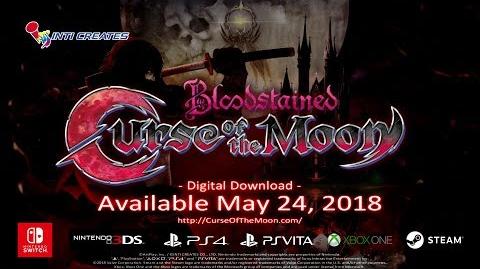